No country in Asia in recent years has undergone so massive a political shift in so short a time as Myanmar. Until recently, the former British colony had one of the most secretive, corrupt, and repressive regimes on the planet, a country where Nobel Peace Prize laureate Aung San Suu Kyi was held in continual house arrest and human rights were denied to nearly all. Yet events in Myanmar since the elections of November 2010 have profoundly altered the internal mood of the society, and have surprised even Burmese and seasoned foreign observers of the Myanmar scene. The pessimism that pervaded the society prior to the elections, and the results of that voting that prompted many foreign observers to call them a "sham" or "fraud," gradually gave way to the realization that positive change was in the air. In this updated second edition of Burma/Myanmar: What Everyone Needs to Know®, Davd I. Steinberg addresses the dramatic changes in the country over the past two years, including the establishment of a human rights commission, the release of political prisoners, and reforms in health and education. More than ever, the history, culture, and internal politics of this country are crucial to understanding the current transformation, which has generated headlines across the globe. Geographically strategic, Burma/Myanmar lies between the growing powers of China and India. Yet it is mostly unknown to Westerners despite being its thousand-year history as a nation. Burma/Myanmar is a place of contradictions: a picturesque land with mountain jungles and monsoon plains, it is one of the world's largest producers of heroin. Though it has extensive natural resources including oil, gas, teak, metals, and minerals, it is one of the poorest countries in the world. And despite a half-century of military-dominated rule, change is beginning to work its way through the beleaguered nation, as it moves to a more pluralistic administrative system reflecting its pluralistic cultural and multi-ethnic base. Authoritative and balanced, Burma/Myanmar is an essential book on a country in the throes of historic change. What Everyone Needs to Know® is a registered trademark of Oxford University Press. 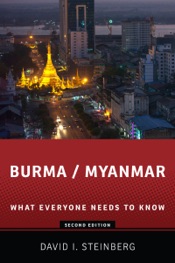 Comments
Free read eBooks online from Burma/Myanmar. Review Burma/Myanmar for free and without need to Registration. Read Burma/Myanmar PDF/e-Pub/kindle fire on your devices without any apps or contracts.