From Lawrence Ritter (The Image of Their Greatness, The 100 Greatest Baseball Players of All Time), comes one of the bestselling, most acclaimed sports books of all time, The Glory of Their Times—now a Harper Perennial Modern Classic.

Baseball was different in earlier days—tougher, rawer, more intimate—when giants like Babe Ruth and Ty Cobb ran the bases. In the monumental classic The Glory of Their Times, the golden era of our national pastime comes alive through the vibrant words of those who played and lived the game. 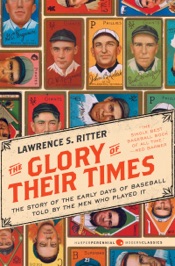