The Disney Dream was Disney Cruise Line's first new ship in 13 years. The Disney Magic and Disney Wonder were launched in 1998 and 1999, so much has changed since the time of their construction. The Disney Dream, launched in 2011, and its sister ship, the Disney Fantasy, which set sail the following year, make full use of technology to create fun and interactive experiences.

On the Disney Dream, you can interact with paintings, have a conversation with Crush the turtle, ride the Aquaduck water roller coaster, and have an outside view through your virtual porthole even if you're in an inside stateroom. Even if you've sailed on the Disney Magic or Wonder before, the Dream is literally a whole new world.

The Disney Dream is also much larger, with expanded spaces for kids, tweens, and teens. The ship is a destination on its own, even if you never disembark. Although it's not quite the equivalent of Walt Disney World at sea, it's just about as close as you'll come. Of course, it still features Disney characters like Mickey Mouse and Donald Duck, which is a hallmark of any Disney experience.

If you're sailing on the Disney Dream soon or have already booked your cruise, this ebook tells you about everything this amazing ship has to offer. It covers the different types of staterooms, restaurants, entertainment options, shopping, the spa, the areas for kids, teens, and adults, and more. It also lists the differences between the Disney Dream and Fantasy.

The author, Barb Nefer, has taken over 80 Disney cruises, including several on the Dream. She attended the christening and sailed on the Dream's maiden voyage, and she shares her knowledge of this amazing new vessel with readers of this ebook. 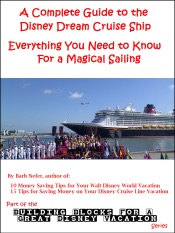