This volume brings together a series of lectures A. V. Dicey first gave at Harvard Law School on the influence of public opinion in England during the nineteenth century and its impact on legislation. It is an accessible attempt by an Edwardian liberal to make sense of recent British history. In our time, it helps define what it means to be an individualist or liberal. Dicey's lectures were a reflection of the anxieties felt by turn-of-the-century Benthamite Liberals in the face of Socialist and New Liberal challenges. A. V. Dicey (1835–1922) was an English jurist, Vinerian Professor of English Law at Oxford University, and author of, among other works, The Law of the Constitution. Richard VandeWetering is Associate Professor of Political Science at the University of Western Ontario. 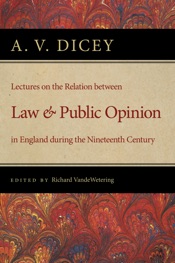