A new edition combining two of the greatest works of law, legal theory, and legal history. Oliver Wendell Holmes, Jr., before he became the legendary Justice of the U.S. Supreme Court, redefined the very idea of law with two landmark works: his 1881 book The Common Law, describing the use of history and precedent from common-law and Roman sources to make new law; and his 1897 article in the Harvard Law Review, "The Path of the Law," which developed the concept of law and morality -- or amorality, really -- that began with his earlier book.

These works ushered out an age of legal formalism and the notion that rules have some inherent, logical meaning, and set the stage for legal realism and a pragmatic view of law and judicial decision-making. They are considered two of the most influential, important, and elegant works of law and political philosophy.

This 2012 digital edition features eBook formatting,  linked and properly numbered footnotes, and a complete and accurate rendition of both works from the original sources. It is part of the Legal Legends Series from Quid Pro Books. It also features an explanatory Foreword and biographical summary by Steven Alan Childress, a law professor at Tulane, as well as an extensive section of photographs and rare images of Holmes and from his original book.

Oliver Wendell Holmes, Jr. was an innovative and influential thinker famous for The Common Law, as lectures and a book, before he became a Justice on Massachusetts' highest court and later one of the greatest Associate Justices of the U.S. Supreme Court. Known as the Great Dissenter on that Court, his opinions won the day in history -- adopted decades after his death. Their ideas are seen in this book and explained in the new Foreword.

Steven Alan Childress is the Conrad Meyer III Professor of Law at Tulane Law School and coauthor of the three-volume treatise, Federal Standards of Review (LexisNexis, 4th ed. 2010). He earned his law degree from Harvard and his M.A. and Ph.D. from Berkeley in Jurisprudence & Social Policy. He has also edited a version of The Common Law with extensive explanatory notes, inserts, and updates, entitled 'The Annotated Common Law,' and it is available in expanded print and ebook editions. 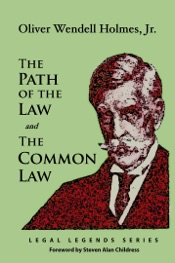