On January 22, 1906, the passenger ship Valencia lost her way in heavy fog and rain and rammed into the deadly rocks at Pachena Point on the west coast of Vancouver Island. As the wreck was shattered by the pounding waves, the survivors clung desperately to the rigging. Few made it the short distance to shore through the frigid and turbulent waves—117 of the 164 souls aboard perished. A year earlier, the King David had been wrecked on Bajo Reef near Nootka Sound. The fate of her sailors was much more mysterious.

Today, the magnificent Pacific coastline of Vancouver Island draws hikers, surfers and storm-watchers to marvel at its natural splendour. But the ghosts of the Valencia, King David, Janet Cowan, Pacific, Soquel and dozens of other lost ships still haunt the rugged shores of the Graveyard of the Pacific. Anthony Dalton tells the incredible stories of many of these ships and their courageous crews, who often discovered that their nightmares had only begun once they made it ashore. These true tales of disaster and daring rescues are a fascinating adventure into British Columbia maritime history. 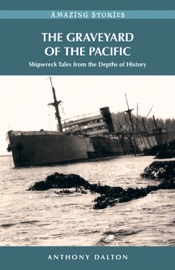