Elibron Classics. Digitized replica oof 1898 edition by Fleming H. Revell Company, New York - Chicago - Toronto.
This is an illustrated edition. Oversize maps are available as a free download.
This book was written by a remarkable woman, Isabella Bird Bishop, an independent British Victorian lady who had also written books about Japan and the US. She toured Korea four times between March 1894-7, and also toured Manchuria and Korean settlements in the Russian Far East. She visited Pusan, Seoul, and Pyongyang, and also sailed the Han River on a raft and climbed the Diamond Mountains. Her accounts and opinions are unusually precise and honest, and still meaningful. Other topics of discussion include marriage customs, shamanism, political events, accounts of the Sino-Japanese War, Koreans in exile, and interviews with the Korean royal family. 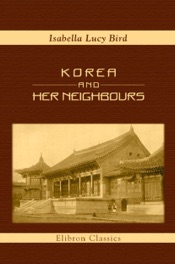