The Revelation of Metatron is a medieval Jewish work, that claims to have been written in the late-2nd century AD by Rabbi Ishmael 'the High Priest.' It is known by various names, including the Sepher Hekhalot (Book of the Palaces), the 3rd Book of Enoch, and the Book of Rabbi Ishmael the High Priest, although its most common name, is the Revelation of Metatron. The earliest name for the work was likely the Sepher Hekhalot (Book of the Palaces), however, all copies have been so reworked that it cannot be known for sure. It is clear that Rabbi Ishmael did not write it, and his name, which is in almost every verse, was inserted to replace another name that the medieval publisher did not want associated with the book. Rabbi Ishmael was the author of the book called Hekhalot Rabbati (Greater Palaces) sometime between 100 and 130 AD, and his name was late used as a pseudonym by many authors of Merkabah literature between 200 and 1000 AD.

The story of Samyaza and Azazel, which like the Yiddish Ascension of Moses is a Yiddish story found among the Chronicles of Jarahmeel, also appears to be a very ancient story bordering about as close as a Jew could get to polytheism without actually crossing that imaginary line. It is included as an appendix as is seems relevant to the question of Metatron's origin within Judaism, however, it is its treatment of Astarah that reveals its true age. The name is a variation of Asherah, who is mentioned many times in the Hebrew Bible, generally in association with Ba'al. Her worship was banned by King Josiah in the Hebrew Book of Kings when he banned the worship of Ba'al and the armies of the sky (hosts of heaven). Archaeological evidence has proven that Jews (or possibly Essenes) continued to worship Asherah until the 6th century BC, during the early Persians era, which is missing from the Talmud's records. 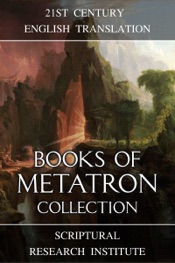