"With this engrossing urban fantasy, Ringle delivers a queer fairy tale as electrifying as it is tender"—Publishers Weekly

Lush and imaginative—an epic fantasy for a new generation, full of love, vengeance, redemption, and forgiveness.—Pam Stucky, author of The Universes Inside the Lighthouse

Awakening the handsome prince is supposed to end the fairy tale, not begin it. But the Highvalley witches have rarely done things the way they're supposed to. On the north Pacific island of Eidolonia, hidden from the world by enchantments, Prince Larkin has lain in a magical sleep since 1799 as one side of a truce between humans and fae. That is, until Merrick Highvalley, a modern-day witch, discovers an old box of magic charms and cryptic notes hidden inside a garden statue.

Experimenting with the charms, Merrick finds himself inside the bower where Larkin lies, and accidentally awakens him. Worse still, releasing Larkin from the spell also releases Ula Kana, a faery bent on eradicating humans from the island. With the truce collapsing and hostilities escalating throughout the country, Merrick and Larkin form an unlikely alliance and become even unlikelier heroes as they flee into the perilous fae realm on a quest to stop Ula Kana and restore harmony to their island.

"Lovely and evocative, Lava Red Feather Blue is sure to delight lovers of fae, fairytales, and fantasy.—Allie Therin, author of Spellbound 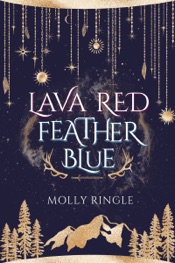