It took something truly remarkable to save the 1981 Major League Baseball season from being remembered only as the year of the players’ strike. It took the Los Angeles Dodgers: Fernandomania and Lasorda and Garv and Bake and the Penguin. It took three amazing October comebacks to beat the Houston Astros, the Montreal Expos, and, finally, the New York Yankees, avenging Dodger World Series losses to the Yankees in 1977 and 1978. Rick Monday was right in the middle of that magical 1981 Dodger season. His recollections and conversations with teammates provide a behind-the-scenes view of one of the most amazing teams and seasons in baseball history in the newly revised version of Tales from the Dodgers Dugout. 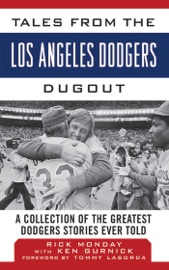