A girl and her dog deliver justice with a vengeance.
The first three mystery thrillers in the best selling Sydney Rye series: Unleashed, Death in the Dark, and Insatiable.
Blue was as tall as a Great Dane but much skinnier, with the snout of a collie, the markings of a Siberian husky, the ears and tail of a shepherd, and the body of a wolf with one blue eye and one brown. Crouched in a sitting position, unable to lie down or sit up all the way, he looked at me from between the bars, and I fell in love.
I adopted Blue from the shelter, and everything in my world changed...
When I brought him home I wanted something in my life that was worth holding on to. I’d just broken up with my boyfriend and picked up a dog-walking gig on the Upper East Side. I was young and lost…normal. I was still Joy Humbolt.
I'd never even heard the name Sydney Rye. Never seen a dead body, gotten beat up, or shot at. I didn’t set out to be a hero—couldn’t have imagined becoming a vigilante. But I don’t regret what I’ve done… the lives I’ve saved or the ones I’ve taken.
*The Sydney Rye series has been downloaded over a million times. Recommended for adults who love brave female protagonists, dogs, and action-packed series that you can't put down until you've read them all. If you have trouble with the f-bomb, violence, or sex (not graphic but out of wedlock).. then you shouldn't start this series....it's just not your thing. If you're looking for your next adventure, you've found it.* 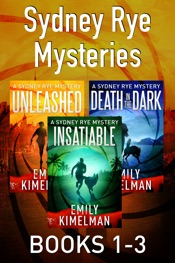